These customers were from Manhatten NY.  They told me of rounding a corner and coming face to face with a gigantic bellowing beast.  Nearly frozen with fear they slowly crept backwards and then hiked as far as possible off trail and around the frothing, fly covered, crap stained animal.

Now, if you have lived out West, Mid-West, or pretty much anywhere outside of a major urban area you are probably rolling your eyes about now.  But seriously think about this.  Who's the crazier person?

I would have ridden toward the beast, screaming at it,  fully expecting the animal to move.  "Get off the trail hoofed ungulate!!!"   MOOOOV!!!!!!!!!!!!!!!   I would wave my arms upon charging it, completely unconcerned that the animal might trample me to death or spear me with its dull pointy horns.

How on earth could I explain to this poor group of Manhatenites that this is the best way to get the animal out of your way.  Imagine acting this way to a Rhinosoris in Africa or a Grizzly Bear in Alaska?  It's no wonder they looked at me like I was crazy.  "Just yell at it!"  I said. And they were like …  "Seriously it's like a thousand pounds!"

"Yup, just tell it to move and kind of ride toward it.  But make sure it's a Cow not a Bull!"

"Just look for these." 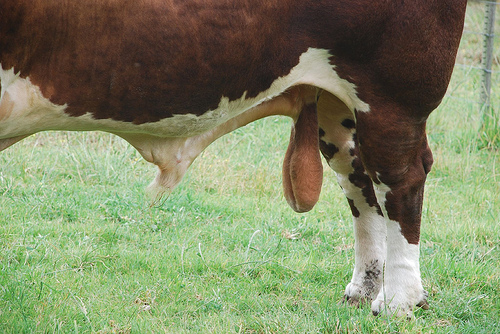