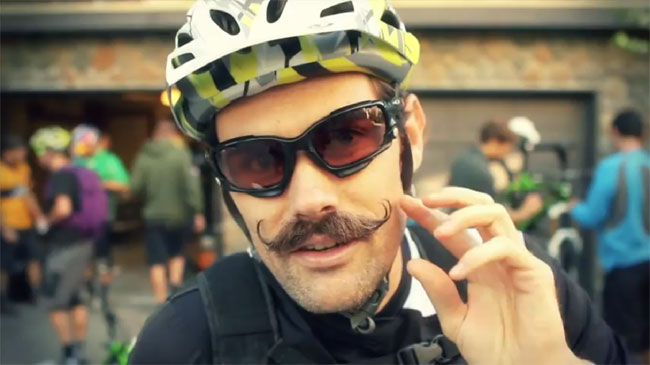 “I’m a desert rat who loves red rocks and technical riding.” This is a typical understatement from our store owner Ross Schnell. Ross has been riding and racing bikes his whole life. He was the CO state BMX champion in 1991, as well as a long-time sponsered pro athlete with Trek. He won the 2008 All-Mtn World Championship and the 2009 World Single Speed Championships. Ross is freakishly fast on a bike, up or down. He’s also one of the nicest, most humble pro athletes you’ll ever meet. Ross’ role here at OTE is to promote our store by doing what we all love to do- ride bikes! Also, if you enjoy racing Enduro then you owe Ross a beer for the years of behind the scenes work that it took to bring this discipline to the United States. Ross’ Website 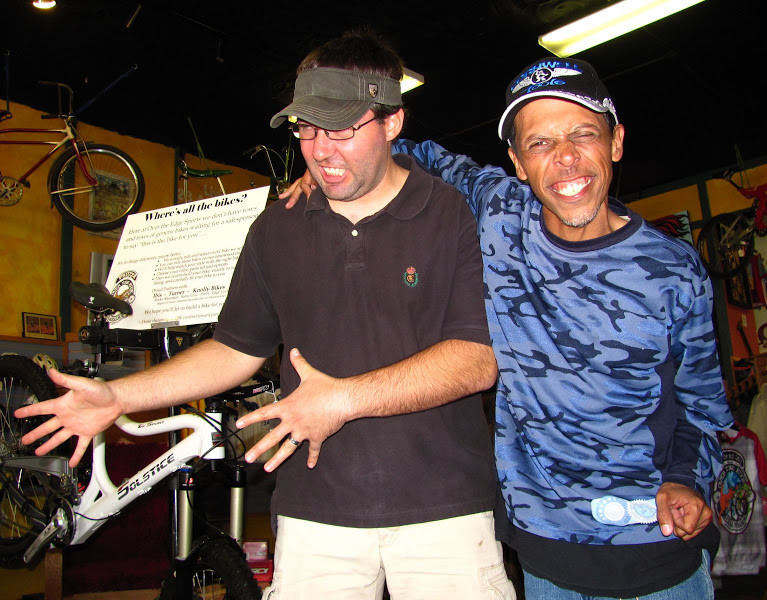 George has been part of the OTE family since the beginning. He worked at OTE in high school and was part of the original crew of renegades building trail at 18 Road. George raced as a semi-pro XC racer from 1997 to 2002 and was ranked 5th nationally. After his racing career, George completed a business degree with the hope of melding his love of cycling with successful business practices. In August of 2010, the opportunity to manage Over the Edge Fruita presented itself. George partnered with his long-time racing buddy, Ross Schnell, and the rest is history. George is proud that Over The Edge and Fruita are one of the most desired biking destination in the world. 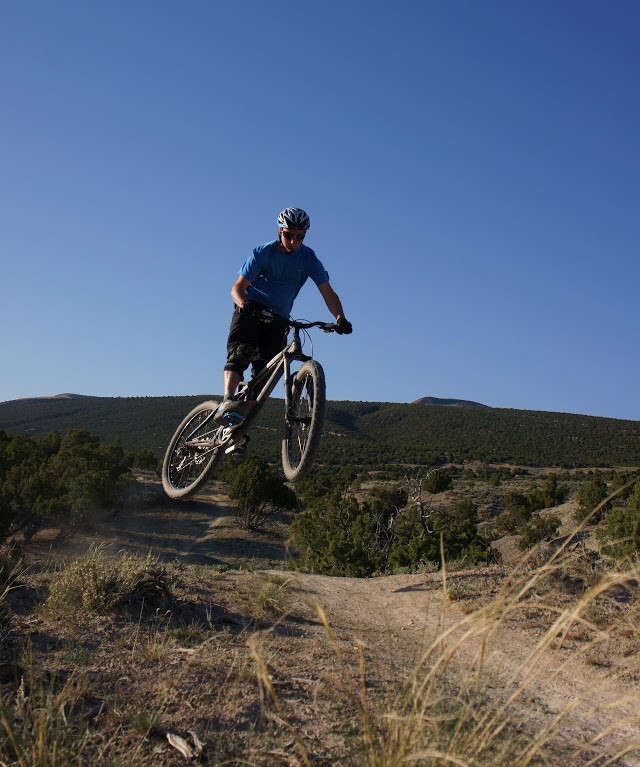 Landon is a 21-year bike industry veteran who left small-town Missouri to chase his MTB dreams. In his words, “in 2010, the opportunity to manage the coolest shop on the planet came along, and I’ve never been happier.” When Landon is not in the shop, he can be found exploring new and uncharted trails all over Western Colorado and Utah. In 2009, just a few years after recovering from a severe back injury, he completed the Centurion- 104 grueling miles of Moab’s toughest terrain in one day! Landon has slowed down as a rider, but he’s also become better at being patient enough to help his six and 2 -year-old daughter’s shred harder then most adults! 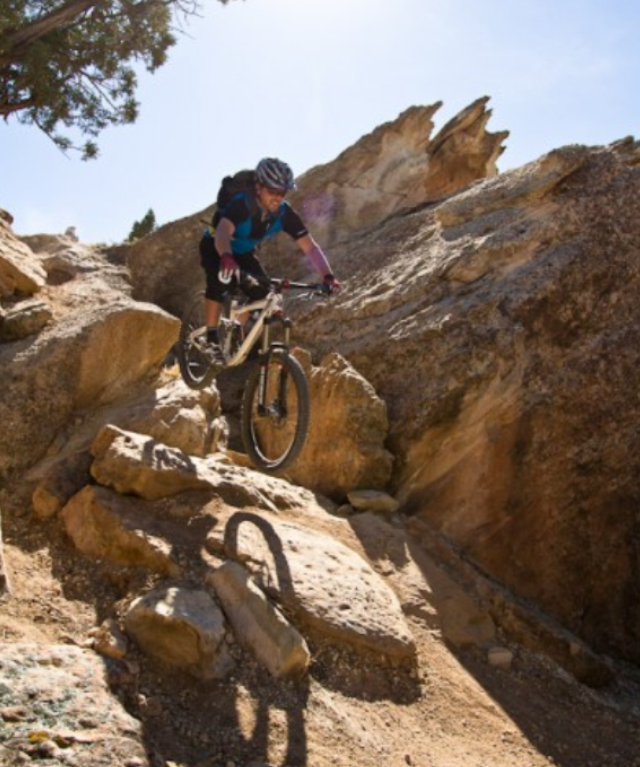 Mike left his home state of California and moved to the Colorado desert for one of the oldest reasons known to man…a woman! Luckily for us, Mike is one of the top bicycle sales-guys in the country and needed a job. If you happen to be in the northern Yukon Territory in winter and run into Mike, don’t be surprised if he sells you an ice cream cone. The cool part is that he would sell you an ice cream cone perfectly suited for your needs, properly fit, and with the greatest flavor you’d ever tasted. He’s that good when it comes to bikes! 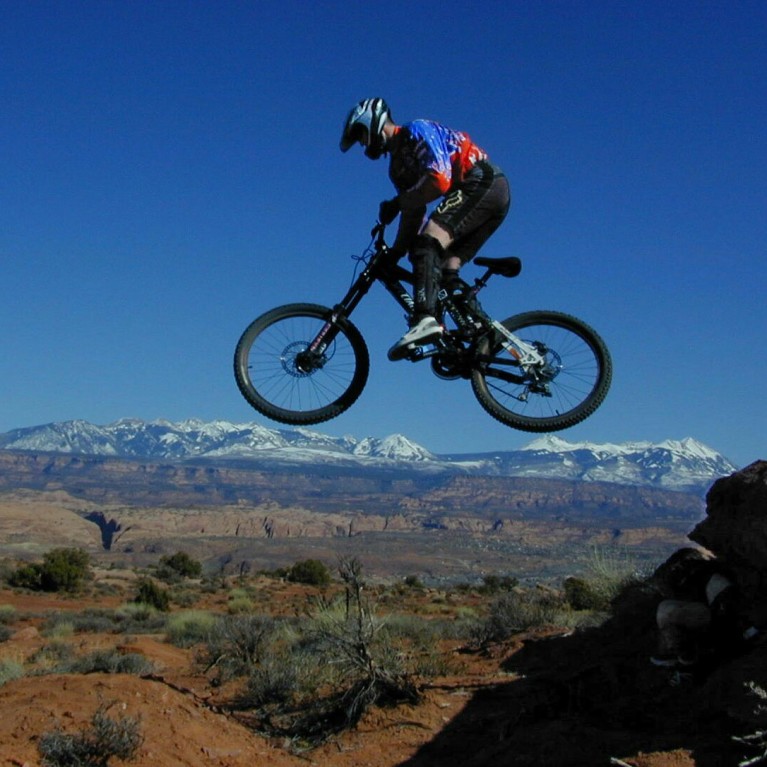 Dan grew up in the Grand Valley, but came back to us from Telluride, CO where he ran shops and service centers for many years. Dan was a pro-level downhiller for a decade on the Mountain States Cup series and was the mechanic for many of his fellow racers. As he wanted to move to an environment with more warm weather riding and a lower cost of living, Dan succumbed to the ‘Curse of the Valley’ and came home. 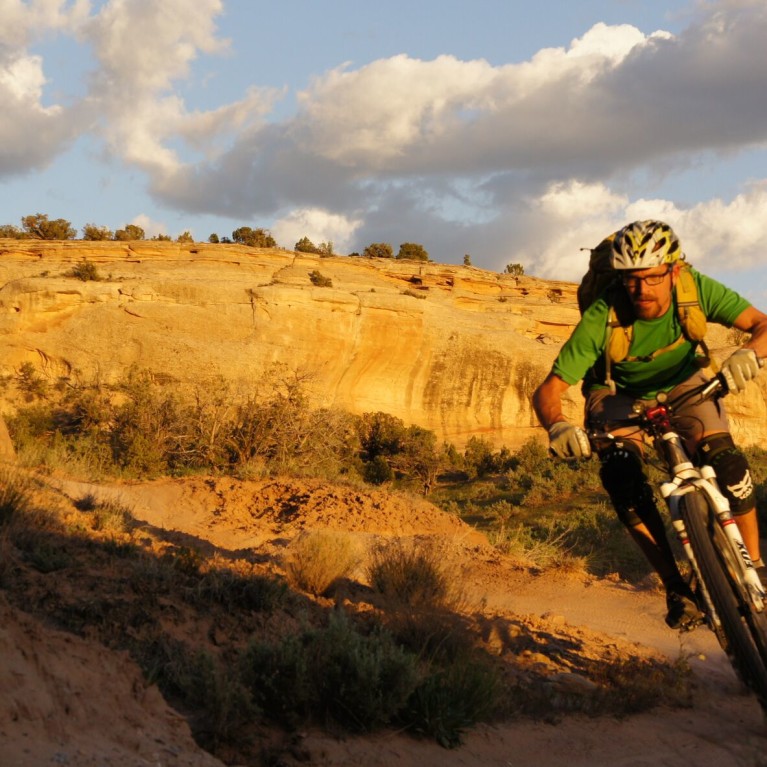 Greg, or G-Regular as we like to call him, has a penchant for long rides and has toured, mostly on dirt and obscure tracks, throughout western North American and in Hawaii, New Zealand, Chile, and Mongolia. (He once tried riding to the moon but suffers from ga-lactic acid build-up). When not riding, he’s often taking photos of riding and has been published in Mountain Flyer and Dirt Rag magazines and maintains one of the best blogs on the web. Despite years of experience in bike shops, he still cannot ride a wheelie. 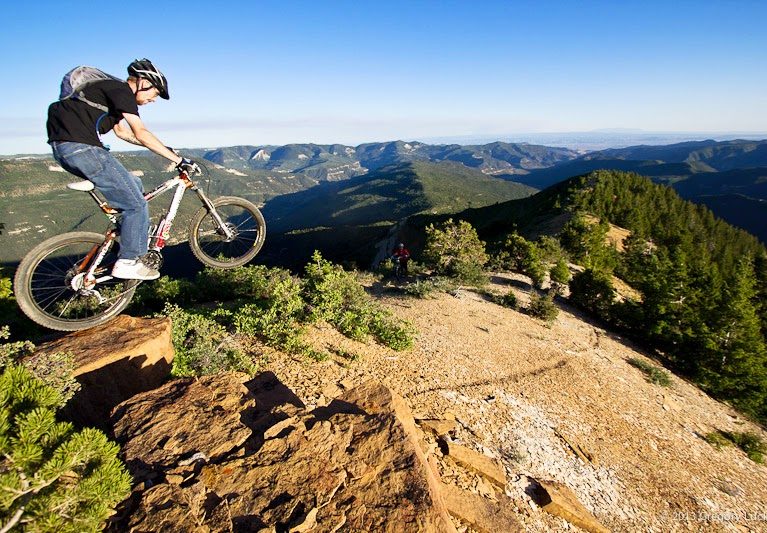 Almost 10 years ago we hired Dan and taught him how to work on bikes.  Now Dan teaches us!  The student has become the teacher and we truly rely on him to now figure out the most complex of our technical bike problems  He has the work ethic a boss dreams of- always positive, ready to hustle, and obviously a high degree of mechanical aptitude.  But don’t expect Dan to sugar coat anything. If your bike is broken, hand it to him and step away. He’ll have it fixed in 15 minutes and at the smallest possible expense. He’s a mechanic’s mechanic…helping talented techs figure out technical problems. 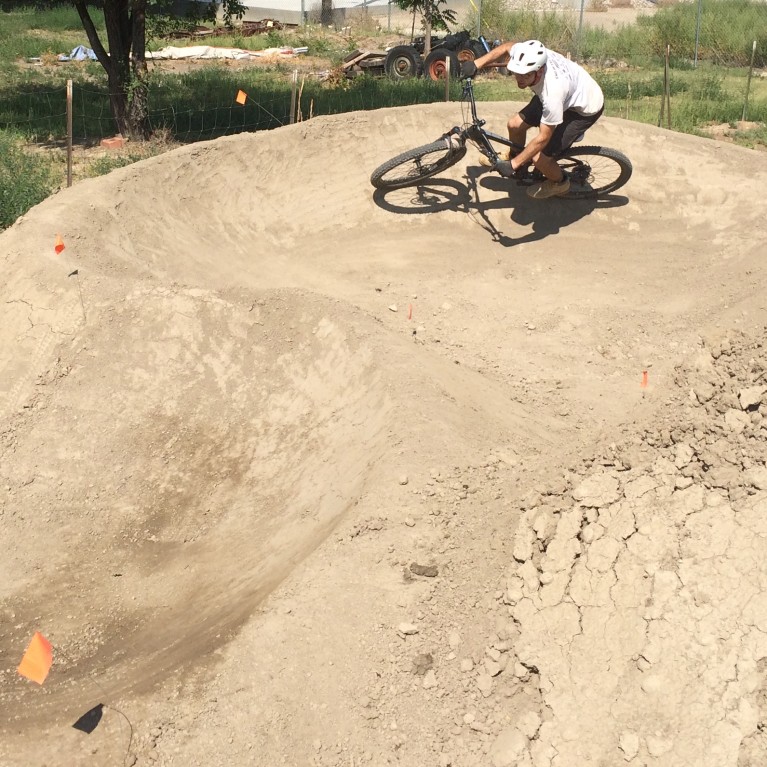 Zach is a man of few words. In fact, we call Zach the ‘Bike Whisperer,’ because he likes to take apart small things that contain tremendous pressure and springs, air and oil, then successfully put them back together! Rear shocks, seat posts, creaky bikes- all the really hard, seemingly unsolvable problems get handed to Zach. When you’ve been to three shops, scoured the internet trying to find a solution to your bike’s problem, and it still persists, you’ve really only got one option left. You need the ‘Bike Whisperer!’ 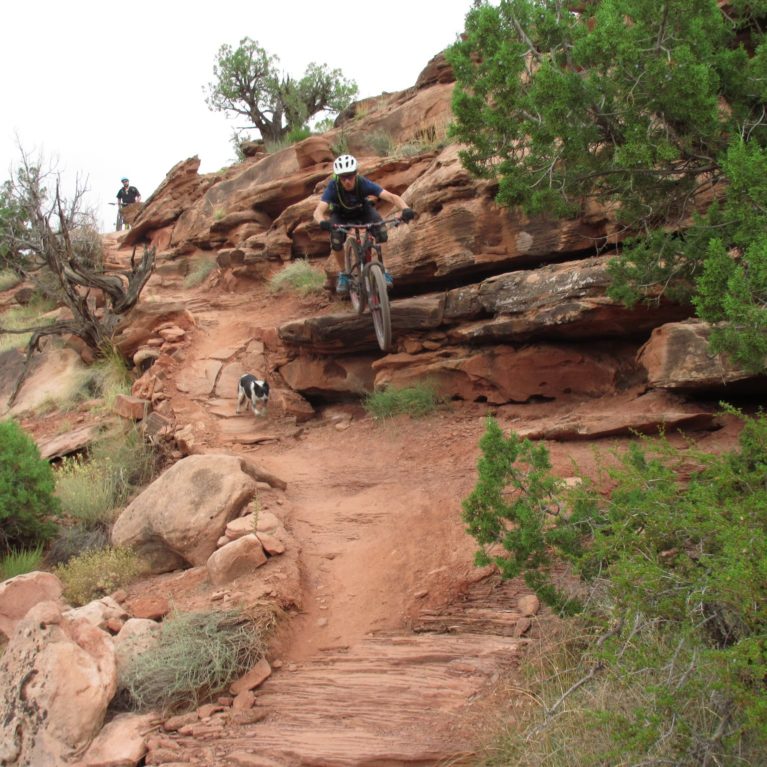 Joel began his OTE career in 2001, but was quickly sacked for incompetence and lack of hygiene. In the following 18 years, he’s worked for nearly every Grand Valley bike shop before coming full-circle and returning to Fruita with years of technical experience, slightly better hygiene, and a Monster Energy addiction that keeps him off the couch. Whether in our service center or out on the trail, you will find Joel shadowed closely by his trusty trail dog Sally. Joel enjoys 27.5 wheels. flat pedals, and long rides in the desert. 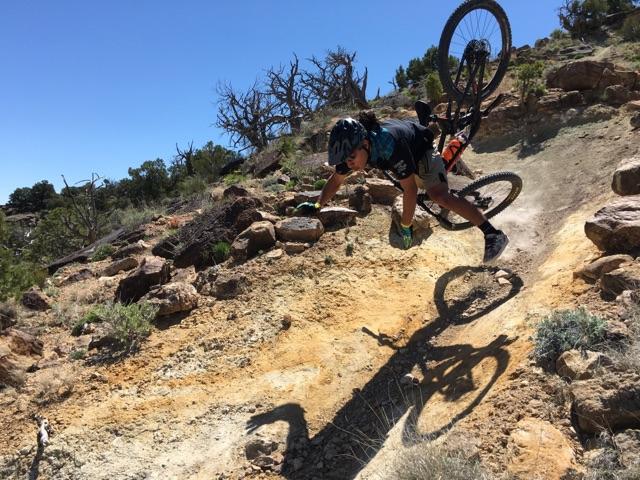 “Welcome to Over the Edge Fruita, you’ve got Jay,” says the voice through the phone. It’s a good thing when ‘you’ve got Jay,’ because he helps make mountain bike dreams come true. Like many staff members, Jay came to us seeking employment so he could live his dream of riding dirt and snow as much of the year as possible. The benefit for the customer is when ‘you’ve got Jay’ for your rental reservation, much-needed trail recommendations, or new product advice, he will point your wheels in the right direction! Jay is also coming into his own as a bike technician, so don’t count out his bike fixin’ skills. 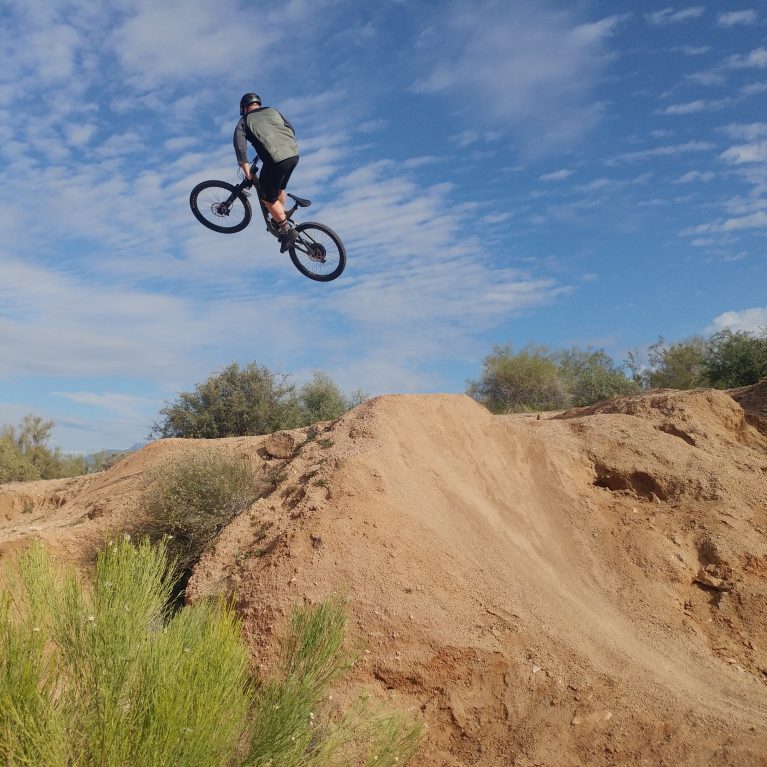 Blake came to us via Australia, Utah, and originally Vermont.  He’s been working on bikes since he was a small kid, working at a camp that supplied bikes to its guests.  He’s now almost 20 years into his bike career and we were lucky enough to talk him into working with us.  Always smiling, always positive!  We are loving have Blake on our staff.

Where, oh where, could we find a highly talented, female sales member who knows our trail systems, lots about bikes, and has retail experience? It turns we had that person very near to us…LeAndra is married to Zach, our ‘Bike Whisperer’ technician. LeAndra brings a great perspective to our shop full of dudes, and she proves that there is no such thing as being ‘just a girl!’ When LeAndra was tired of managing a big corporate store in the mall and wanted to go ‘Over The Edge,’ we hired her. She is a bad ass on a bike, and her bike knowledge is just as lethal as her husband’s mechanical skills!

“The dinosaur in the picture to the left (the one riding the bike) is a velociraptor, meaning ‘swift seizer,’ in Latin. It lived approximately 75 to 71 million years ago during the later part of the Cretaceous Period. It normally hunted in packs, but when it hunted alone it used a bike to gain greater speed,” says Olivia Ruiz, our  sales staff member, “It could quickly out-run this little girl riding this tiny green bike.” Just like all OTE employees, Olivia has bike shop experience and has spent four seasons in our shop. While paleo art and dinosaur restoration originally brought her to Fruita, Olivia is super hyped on bikes too! How cool is it that the OTE logo is a Dino, and our Olivia has a degree in geology, as well as her bike shop expertise. If you need Fruita trail advice, help with your bike, or simply want to talk about the difference in tail angle on T-Rex interpretations from the 80’s compared to interpretations from 2004 and up, Olivia is your girl. 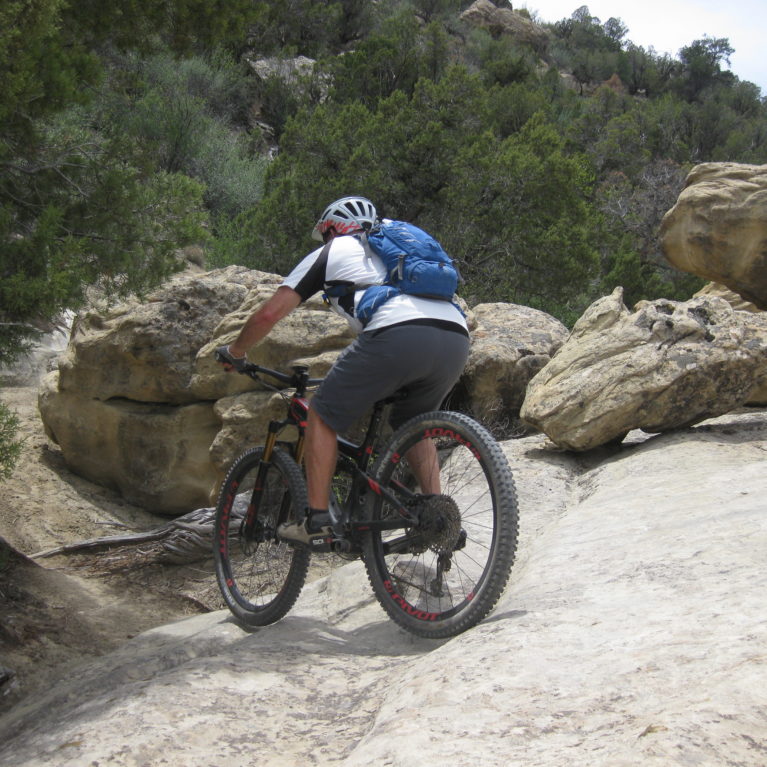 Despite being a self-described bike industry noob, Peter came to us with years of sales experience in the power sports world, and as his passion led him more towards the manually (and battery) powered side of things, he joined the OTE family. Peter has mountain biked since 1983, longer than half the shop has been alive, and even though he enjoys long rides that take you far away from the crowds, Peter is a total people person and his sales repertoire is growing quickly here at OTE! 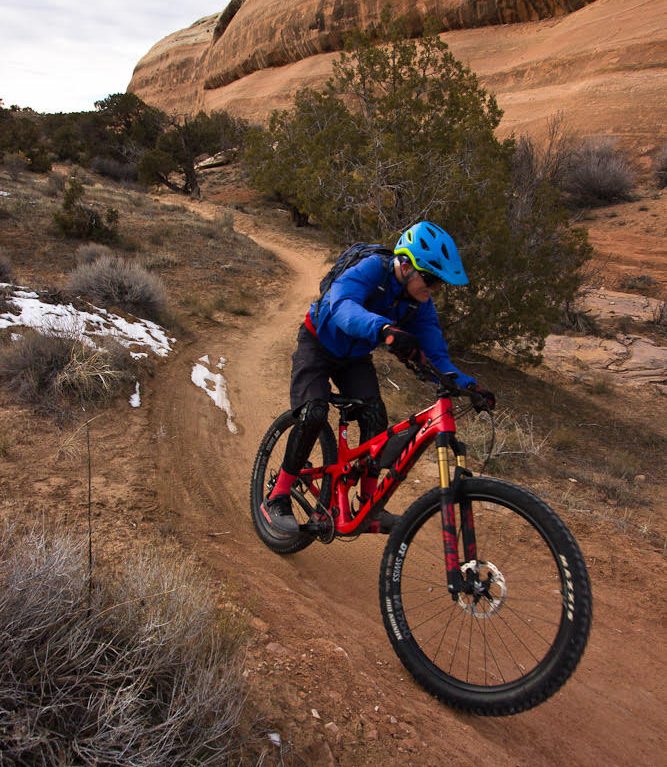 There is NO ONE ELSE ON EARTH like our Captain Kirk! Quick witted, sassy, sarcastic and incredibly helpful all at the same time.  He’s really OLD too!  (104 we think?)  A women once came in looking at all the old bikes on the ceiling that are part of our museum.  She said, “I love all this old stuff you have hanging around.”  Kirk said, without missing a beat, “Thanks, I’m glad I’m still here too.”

Remember when you were 16 and started your first real job? Maybe you felt a bit awkward and unsure of what to do? That’s where Colton currently sits as our Grom, but we have a good feeling about this kid. He’s smart, a quick learner, and likes to take his dirt bike transmission apart! That’s the kind of kid we can work with. We’re lucky to have Colton manning the bike washing station! 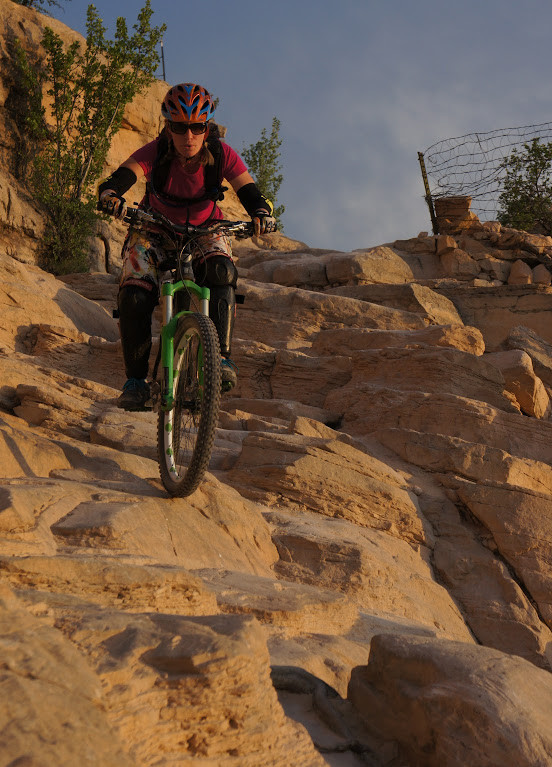 Mary grew up in Moab, UT and has worked in the bike industry since she was 14 years old. She was a “free rider” before any of us knew what that meant and long after everyone forgot what it meant. She’s one of the most accomplished female riders anywhere and has a habit of singing Disney songs while kicking butt at the front of a group of fast guys. A friend once said, “Mary will destroy you on a six hour bike ride, then bake you cookies when you get home.” That’s our girl!

Uhhhh, where’s Jac?  Not done yet….She’ll be worth the wait!