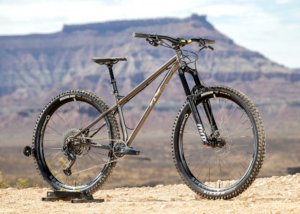 Twas the early winter of 1998 when Edge Cycles was born amidst the rise of Fruita Singletrack and Over the Edge Sports in Fruita Colorado. Passion for technical singletrack, short chain-stays and a belief in the ride quality and sustainability of steel (and surely fueled by a few beers) led us to the obvious conclusion. “We should build our own bike”! Scott did the drawings of our first design with 71/73 angels, short stays and long top tubes on a 26” wheel. Since none of us were welders, Tim found us a connection with Jack at Vail Cycle works and by the early spring we launched the first Edge Cycles at an after hours party at OTE Fruita and every bike was immediately sold. Within days all of those original 16 bikes were on the trail and shredding the skinny singletrack of fledgling Fruita Colorado.

For twelve years we built about 25-50 ish bikes a year, all finished beautifully by Mark Brandt but fabricated by various legendary builders. James Bleakley led us into Columbus FOCO tubing and when Jason Grove came to Fruita he became the builder of the final several years of the early legacy of Edge Cycles. The last two frames were built in 2010, full suspension finally worked well and carbon was all the rage so we ceased building bikes for a decade until now. As we decided in 2020 to pursue the reincarnation of the Edge hardtail, we pondered new designs, big wheels and the cutting edge designs of this new era. Almost simultaneous occurrences led to the new Edge Cycle coming to “fruition”.

As we pondered design, several OTE alumni were already riding Canfield Nimble Nines and telling us that we should build a bike like this. Canfield announced that this legendary bike brand was coming home to Fruita and in a pure random Lance and Troy ran into each other at a brewery.

A quick chat led us to another obvious thought, maybe we should build a bike together and maybe it should be an Edge Cycle version of the Nimble Nine. The beauty of partnering with an established brand like Canfield Bikes allowed this bike to move from an idea to actuality in a mere six months. Being a pure Fruita partnership gives it a wealth of style and culture and led us to seek parts spec that echoed our relationships in the industry and the use of local companies like MRP. We are proud that this complete bike is kitted from friends and industry partners and demonstrates a true community partnership.

We are proud to announce the 2021 Edge Cycle edition of the Nimble Nine. You will find it in demo at Over the Edge locations (Fruita, Hurricane, Tahoe, Melrose Australia and Todos Santos Baja) and once again they are quickly finding there way out of the shops and onto the trails. If you find yourself curious about a cutting edge aggressive hardtail, come ride with us and check it out. If they are all sold out by the time you read this? Fear not, we have more on the way and we appreciate the passion, loyalty and endless support of all of you towards the legacy of Over the Edge and the passion project of Edge Cycles.

Thank You for a quarter century of awesome and we look forward to sharing this community collaboration of awesome with you as we once again gather together to ride and share the passion that is MTB culture.