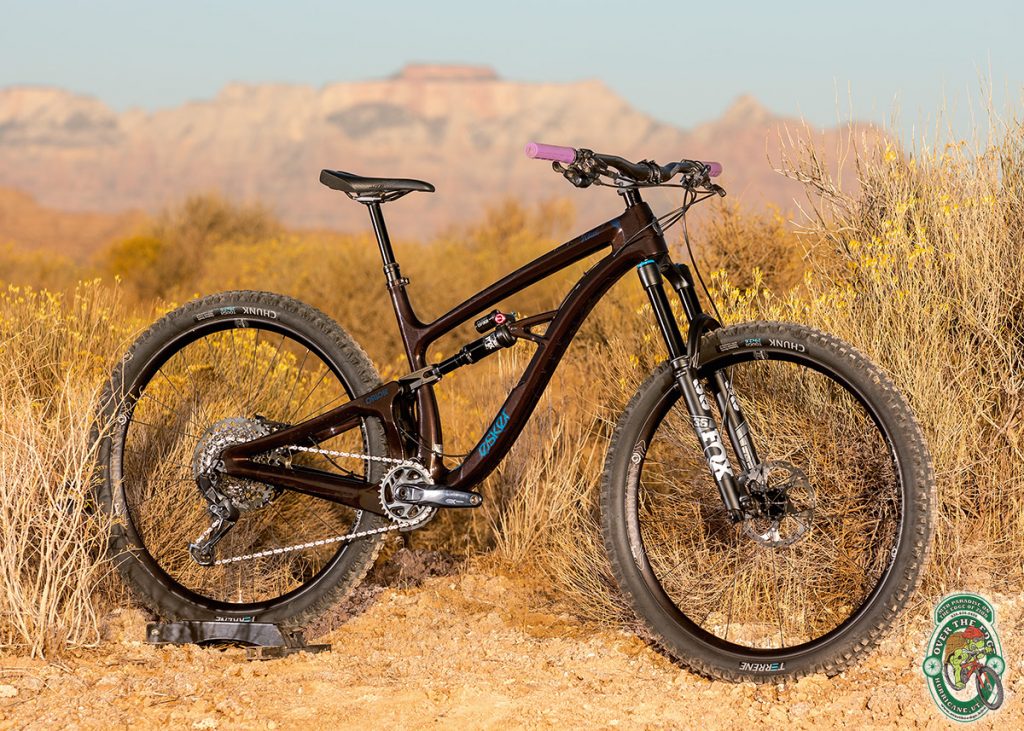 Please welcome the new Esker Rowl to the OTE, HU family! The Esker Elkat was one of the most interesting bikes we added to our lineup, in 2019. Pretty much everyone who rode it loved the comfortable, playful geometry and Orion suspension system. The most common question was, “Does Esker made a 29er?” Well, we have good news for everyone who asked that question – the new Esker Rowl 29er is the bike you’ve been waiting for.

The Esker Rowl has 140mm of rear wheel travel, a 150mm fork, 29er wheels and a clean-looking carbon frame built around Dave Weagel’s Orion Dynamics suspension. The Orion suspension is arguably the most exciting design element of the Rowl. Like Weagel’s ultra-popular DW Link suspension (Pivot and Ibis), Orion is a dual link system. What makes it different from other dual link suspensions is the lower link is in-line with the bottom bracket. To quote Bike Mag: “Like Knolly’s Fourby4, this allows axle path and leverage curve to be dialed independently of each other, and each is very dialed.” On our own Esker Elkat bike page, we described the Orion suspension as combining the plushness of a Knolly with the pedal efficiency of a DW Link bike. If you’ve ridden both types of bikes, you know how impressive that is.

Esker says they, “design bikes for the whole mountain;” and they mean it. One of the things we really liked about the 27.5 Elkat was the geometry. It’s not a stretched-out overly-aggressive enduro race bike but it’s absolutely ready to get rad when you want it to. The Rowl follows the same intuitive all-mountain geometry template. In fact, the numbers are amazingly close to the Elkat’s – something that’s very impressive for a 29er. Very few geometry compromises were made to make the big-wheeled Esker. On the medium Rowl, the reach is 10mm longer and the bottom bracket is actually a bit lower than the 27.5 Elkat. Most impressive, at 425mm, the chainstays are the same length as the Elkat’s, making them shorter than any other 29er all-mountain trail bike we know of.

The Rowl isn’t just an Elkat with bigger wheels, though. We expected it to feel like a smoother-rolling Elkat and were surprised to find it has its very own, unique character. On the trail, the Rowl feels tighter and much more playful than the Elkat. Give it a little pump before a bump and you’ll be surprised how much air you get. The longer-travel, 27.5 Elkat is on the damper/plusher end of the suspension spectrum whereas the Rowl give you a lot more trail feedback and pop. The shorter travel, 29er wheels and tighter suspension tune also make the Rowl a very impressive climber. It flies on the uphills.

When you add it all up, the Esker Rowl is a surprising and exciting 29er trail bike that lives up to Esker’s stated goal of building, “mountain bikes—designed to ride all parts of the trail, and all zones of the mountain.” There isn’t any trail in the Hurricane area we wouldn’t take the Rowl on. Well, we wouldn’t take it on Kong and it wouldn’t be our first choice for Flying Monkey. But for anything else on the mesas, it’s a super fun and wonderfully capable bike. Quentin even took it up to Brian Head for a bike park day and loved it. The 140mm of Orion suspension combined with 29er wheels and 27.5-like geometry makes the Esker Rowl pretty much the ultimate 29er all-mountain trail bike.

The specs below are for the mid-level Esker Rowl 29er – our standard Esker Rowl rental bike build. Scroll down to the pricing table for more build options.

The prices and specs below are for Esker’s standard Rowl 29er build kits. If you want something diffferent, we can build you a custom Esker Rowl with almost any components you want. We love building custom bikes! If you have any questions or want to talk about ordering and building your very own Esker Rowl mountain bike, give us a call: (435)635-5455